Here are some tips to improve your chances for success in a chess tournament:

1. Always get a good night sleep before the first round.

This is crucial to playing well. Chess tournaments can last up to twelve hours per day and most professional tournaments are 2-4 days long. A chess match involves being able to stay sharp even five or six hours into a match. Once I heard about a Grand master flagging (making run out of time) a strong master player by playing a dead equal position past 5.5 hours. Even at the advanced levels, having stamina is crucial.

2. Write down your games.

Writing down your games makes your ability to learn from your mistakes twice as effective. Also, you want to save those games and go over them with a coach. Often, there are mistakes a coach can point out that you may have missed, such as a tactic or checkmate. In addition, writing down your games ensures that one side cannot try to make an illegal move to your disadvantage because you can point to the notation to show exactly what happened.

3. Sit on your hands if you are moving too fast.

Beginners often move too fast because they want the games to end more quickly. My freshman year of high school, I was playing 4-0 going into the final round of the Fresh-Soph Tournament. My opponent was the only other undefeated person in our division and he played very fast. Moving quickly, he played 1. Bxf2+ (D).

Playing quick has a psychological factor. If you move fast, your opponent may think you are confident because they are playing bad moves. However, often beginners will move fast and make mistakes, even ones who are undefeated in a tournament. I confidently took the Bishop and then he played 1…Ng4+ (D) hitting my Bishop. If I played Ke1, he would have played Qxg5, winning a pawn and an attack against my King. 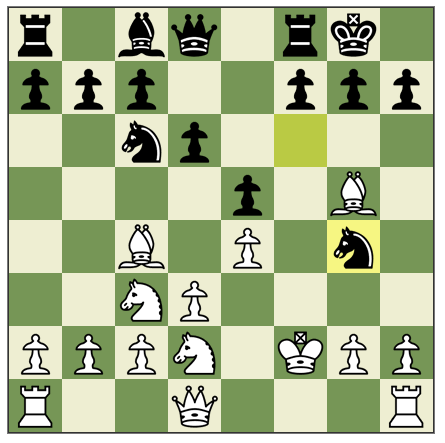 After 2. Qxg4! Bxg4 3. Bxd8 Rxd8 I emerged up a piece. I then traded into endgame and used my material advantage to win. I picked up first place in the tournament. If you sit on your hands, you can make sure that you take your time. Here my opponent made a mistake because they moved too fast.

4. Chew some Big Red cinnamon gum during the tournament.

Studies show that cinnamon’s scent can boost memory in a task. However, if you are chewing gum, its important to also remember not to chew loudly. Many people need silence to focus. Making noise at a chess tournament can interfere with a game. Also, if you are observing or playing in a chess tournament, remember to turn your phone on silent.

Most tournaments play by the rule, if you touch a piece you have to move it. This is called the touch move rule and it can be hard to remember this at your first tournament. Taking your time will ensure that you don’t touch a piece and then realize you wanted to move a different one. Remember, if you touched a piece and realize the square you were going to move it to will lead to a capture, you can always move it to a different square, as long as that is a legal move and you have not let go of the piece. Once you let go of the piece, the move is made. Some people even play blitz (five-minute-chess) with touch move.

6. Remember to hit the clock.

Most tournaments play with chess clocks. You also have to hit the clock with the same hand you move the piece with. If you make your move and forget to hit the clock, your opponent does not have to remind you of your mistake. Once I did this in a tournament when I was younger and I only realized a few minutes later on my own. Remember, if you run out of time, you lose!

If you have an hour to make all of the moves in the game, don’t spend more than a few minutes per move unless it is a complicated position that requires calculation. If you use up all of your time, you’re more likely to make a blunder in the endgame because you will have to move quickly.

8. Never let your face show you made a mistake.

During my first high school chess match, I played a solid game in the Fried Liver Attack and made it all the way to the endgame. After making a move, I realized I had left my knight “en prise,” meaning undefended or “hanging.” Instead of remaining calm, I threw my hands in the air and then buried my face, giving up. My opponent captured my knight. After the game, my opponent told me that he did not notice my piece was hanging until my expression gave it away.

9. Notify the Tournament Director of your games result.

10. Pay attention until the very end of the game.

Even if you’re winning, make sure you stay vigilant until checkmate. Even positions where one side is clearly winning can result in a stalemate or loss if the winning side blunders. Many people play their first tournament and don’t win a game. There are many extra things to focus on when playing competitive chess, and this makes it difficult to focus on the chess moves and strategy, rather than the squares and hitting the clock each time. However, after time, the use of chess notation becomes easier and doesn’t take as much time. Most importantly, no matter what the result, make sure you have fun!